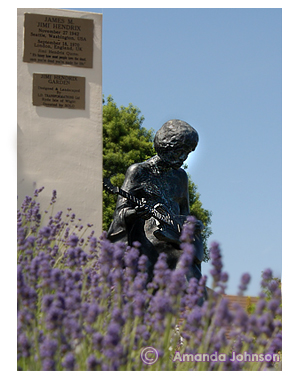 Rock star guitarist Jimi Hendrix, who died 42 years ago aged 27, would have been celebrating his 70th birthday today had he lived.

As the Isle of Wight Digital Imaging Group share space with his iconic statue we felt a birthday mention was in order.

The statue forms a gateway to the permanent exhibition of past and future Isle of Wight music festivals.

This life-size bronze statue (pictured) of Jimi Hendrix stands outside the home of a pioneering Victorian photographer Julia Margaret Cameron. Sculpted by John Swindells, it was commissioned by John Giddings, a Dimbola trustee and promoter of the Isle of Wight festival.

So much as been written about the man, and so much has been hypothesized about what he would have done had he not passed away at 27 years old on September 18, 1970.